Glen Bowers spent several of his teen years in the Washington County Jail. It wasn’t as a prisoner, but living there as the son of Sheriff Lee Bowers.

That’s the way things were done when Bowers served as Sheriff in 1954-58.

Sheriffs and their families lived in the jail. The once frame structure, now brick, still stands on the courthouse square in Nashville and is used as the County Zoning Office. But a few decades ago, inmates were held in cells on the same floors the families used in that same building. Four cells for men were in the rear of the main floor, and one large cell for women in the rear of the upper floor.

The family and inmates used the same main hallway and entry, so there was no real security or separation.

Read his full account and the stories of others who “lived in the jail”, in this week’s issue. 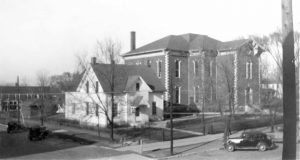 A photo taken in the mid-1900s of the county jail and courthouse. 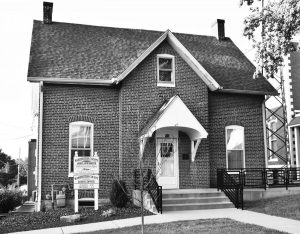 County Jail as it stands today as the Zoning Board Office.