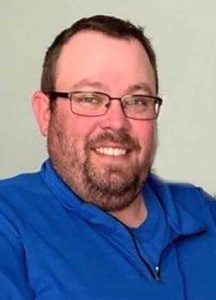 Michael was born in Herrin, IL on October 10, 1983 the son of Paul and Kathy (nee Williamson) Todd. He was united in marriage to Monica Long in Virginia Beach, VA on April 15, 2005 and she survives his passing.

Michael attended Okawville Grade School and Okawville Jr/Sr High School. To say Michael was a prankster while in school would be an understatement. His attendance at Okawville schools caused many a gray hair among his teachers, not to mention his parents. Friends and family have readily shared their stories of Michael’s shenanigans. Shortly after 9/11, Michael joined the United States Navy. He was stationed aboard the USS Nassau based in Norfolk, VA, deployed to the Persian Gulf. He served four years in the Navy and was awarded several commendations including the Global War on Terrorism Service Medal and the Armed Forces Expeditionary Medal. Soon following his discharge, he and Monica moved to California to work and be near her dad. Michael returned to Okawville in 2015 and soon became an integral part of the community. He was a first responder and firefighter with the Okawville Fire Department. He went back to school and was hired as an EMT with the Washington County Ambulance Service, a job he truly loved. While working for the ambulance service, he was deployed to the Carolinas for hurricane relief. He may be the first person ever that was excited to go into a hurricane. Michael deeply loved his brothers and sisters of the Washington County Ambulance Service and Okawville Fire Department. He was full of life and lived it to its fullest. He was always quick with a joke or prank. He was known to randomly break out in song or start talking in one of his silly accents. He has left us with countless memories and stories we will never forget. The family has been comforted by the hundreds of messages of support that they have received. The two things that most everyone has commented on were his sense of humor and his kind heart. He will be missed by all.

Michael was a member of the St. Peter United Church of Christ in Okawville. He was a former member of VFW Post 1051 in Ripon, CA and a proud member of the West Washington County Duck Slayers. He enjoyed hunting, fishing and golfing, not that he was overly successful at any of them. He was a huge fan of the St. Louis Blues. Mostly he enjoyed them for the time he got to spend with his friends. Michael was also a Justice of the Peace Minister and was set to officiate a wedding in the near future. Michael really did break the mold.

He was preceded in death by his paternal grandmother, Linda Williford and her husband Bobby, maternal grandfather, Perry Johnson; and a special family friend, Toby Brown.

Funeral services will be held from the St. Peter United Church of Christ in Okawville on Friday, August 30, 2019 at 11 A.M. with Pastor Jeffrey Schwab officiating. Interment will be in the church cemetery. Military graveside rites will be accorded by American Legion Post 233 of Okawville.

Friends may call at the Education Building of St. Peter’s Church on Thursday from 4 P.M. until 8 P.M. and in the church on Friday from 9 A.M. until the service hour.

In lieu of flowers, memorials may be made to an education fund that will be established for his children or to the Okawville Fire Department and will be accepted by the Campagna Funeral Home.