Mrs. Janet Poggemoeller of Okawville, IL departed this life in the Memorial Hospital in Belleville, IL on Wednesday, August 21, 2019 at 9:10 P 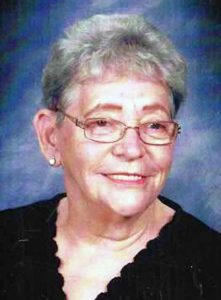 Mrs. Poggemoeller worked as a Certified Nurses Aid and Activity Director at Hamptons Nursing Home in Alhambra, IL and later at Countryside Manor in Aviston, IL until her retirement. She was a faithful member of Immanuel Lutheran Church in Okawville. Janet was a member of the American Legion Post #233 Auxiliary in Okawville and an associate member of the Marine Corp League Detachment 74 in Collinsville, IL. She was also a former member of the Okawville Community Club. Janet enjoyed quilting, sewing and dancing, and she especially loved visiting her friends and neighbors.

In addition to her parents and husband, she was preceded in death by a brother, Sonny Mueller; a sister, Norine Haffer; and two grandchild
ren, Keagan Poggemoeller and Tricia Juarez.

Funeral services will be held from the Immanuel Lutheran Church in Okawville on Tuesday, August 27, 2019 at 11 A.M. with Pastor Eric Wood officiating. Interment will be in the church cemetery.

In lieu of flowers, memorials may be made to American Legion Post #233 of Okawville or to the Marine Corp League Detachment #74 in Collinsville, and will be accepted by the Campagna Funeral Home.