Age is no barrier when it comes to playing in the Segs Volleyball League.

An Okawville team celebrates its age, rather than apologizing for it, with the team name “One Foot In It” (with reference to grave.) Fittingly, the sponsor is Campagna Funeral Home.

“We are old enough to be the parents of players on other teams,” said Jeff Obermeier

At age 55, Obermeier is the oldest person on the oldest team. “It is fun to still get out and compete,” he said. “Volleyball also gives an opportunity to get to know and spend time with a lot of people from other teams that I would otherwise not see.”

Read the fun, full story, in this week’s issue. 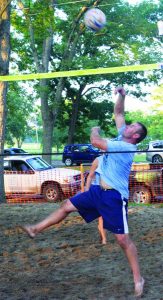