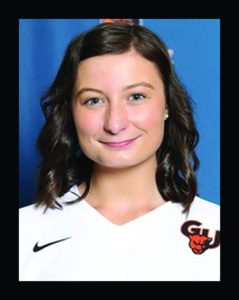 Allyson Brandy Grabowski of Nashville, IL departed this life at 12:36 PM on Monday, July 15, 2019, from injuries sustained in an automobile accident in Bourbon, MO.  She had attained the age of 21 years, 4 months and 3 days.

Allyson was born on March 12, 1998 at Scott Air Force Base, IL, the daughter of Jacek and Kari (Schulte) Grabowski.

Allyson was a senior volleyball student-athlete at Greenville University in Greenville, IL.  She was a three-year letter winner for the Panthers who played 99 matches for Greenville University during her career.  She was a member of the SLIAC third team as a junior and was a two-year SLIAC academic all-conference team member.  She played for two SLIAC regular season championship teams and three SLIAC tournament championship teams while participating in three NCAA tournaments.  Her teams went 74-27 and set a program record with 26 wins in 2017.  Allyson earned a GPA of 3.99 while majoring in biology and chemistry at Greenville University.  She had recently took the MCAT and applied to multiple medical schools.  She was a member of the TriBeta Honor Society, McAllaster Honor Society and she coached several teams for H2 Volleyball.

She was preceded in death by her maternal grandfather, Don Schulte and maternal great grandmother, Evelyn Rainey.

Mass of Christian burial will be held at St. Ann Catholic Church in Nashville, IL on Saturday, July 20, 2019 at 10AM with Fr. Andy Knopik officiating.  Interment will follow in the church cemetery.

Friends may call at the Campagna Funeral Home in Nashville, IL on Friday from 4 PM until 8 PM and on Saturday from 7:30 AM until 9:30 AM.

Should friends desire, mass offerings or memorials may be made to Abbygail Grabowski college education fund and will be accepted by the Campagna Funeral Home.