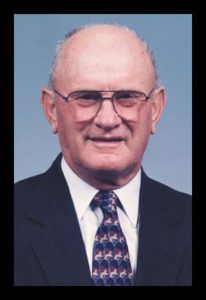 Edward H. Boehning of Nashville, IL, 90, departed this life at the Washington County Hospital Extended Care Unit in Nashville on Wednesday, June 26, 2019 at 6:30 AM. He had attained the age of 90 years, 9 months and 29 days.

Edward was born August 27, 1928 at New Minden, IL the son of Henry and Anna (nee Schuette) Boehning. He was baptized and confirmed at St. John’s Lutheran Church, New Minden.

Edward graduated from Nashville Community High School in 1947 and spent the next four years working for local merchants. In 1951 he was inducted into the U.S. Army and served two years during the Korean War. In 1953 he began working for the Louisville and Nashville Railroad as operator-clerk and station agent, working between St. Louis, MO and Evansville, IN. In 1968 he moved to Belleville, IL and began working for the Missouri Pacific Railroad in the data processing department of their St. Louis office. During this time he traveled to many states in the Midwest to set up their data processing offices and train workers.

While living in Belleville he was an active member of several Lutheran Congregations and elected to various offices. He was also an active member of several community and social organizations. In 1992 Edward moved back to Washington County and rejoined the local Lutheran Congregations. He was a past member of the Okawville Community Club, the Nashville Lions Club and a current member of the American Legion Post 110 of Nashville. He volunteered at the Okawville Village Library and assisted the Nashville Public Library. He was a current member of St. John’s Lutheran Church at New Minden. He enjoyed golfing, fishing, working on line on his computer and reading.

He was preceded in death by his parents; two sisters, Helen Boehning, and Irene Russell and her husband Robert; and a niece, Cecelia Russell.

Funeral services will be held at the St. John’s Lutheran Church, New Minden, IL on Friday, June 28, 2019 at 11 AM with Pastor Timothy Mueller officiating. Interment will follow in the church cemetery. Military graveside rites will be accorded by the American Legion Post 110.

Friends may call at the St. John’s Lutheran Church on Friday from 9 AM until the service hour.

Should friends desire, memorials may be made to a charity of the donor’s choice and will be accepted by the Campagna Funeral Home, who is assisting the family with arrangements.