Mrs. Barbara Crouch of rural Nashville, IL departed this life in the extended care unit of the Washington County Hospital in Nashville on Wednesday, June 12, 2019 at 2:41 P.M. She had attained the age of 78 years, 10 months and 24 days. 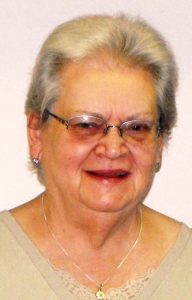 orn in West Frankfort, IL on July 18, 1940 the daughter of Albert and Helen (nee Howard) Dixon. She was a 1958 graduate of Dupo High School. Barbara was united in marriage to John P. Crouch in Dupo on Christmas Eve, December 24, 1961 and he preceded her in death on January 2, 2019 after 57 years of marriage.

Mrs. Crouch was a loving and caring wife and mother and when her boys were young she was a volunteer with the Cub Scouts and Boy Scouts. In her later years, she loved spending time with her granddaughters.

Left to mourn her passing are two sons, John Crouch II and wife Robin of Covington, IL and William Crouch and wife Melanie of Cabot, AR; two granddaughters, Kayla Crouch and Jenna Crouch; nieces and nephews as well as a host of friends.

She was preceded in death by her parents and husband.

Funeral services will be held from the Campagna Funeral Home in Okawville on Tuesday, June 18, 2019 at 11:30 A.M. with her daughter-in-law, Robin Crouch officiating. She will be laid to rest alongside her husband in the Jefferson Barracks National Cemetery in St. Louis.

Friends may call at the Campagna Funeral Home in Okawville on Monday from 5 P.M. until 8 P.M. and again on Tuesday from 8 A.M. until the service hour.

In lieu of flowers, memorials may be made to the Addieville Fire Department and will be accepted by the Campagna Funeral Home.