She was born on April 8, 1936 in Venedy, one of five children born to the late Elmer and Carrie (Finke) Brockmann. 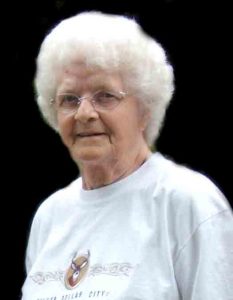 in Venedy and graduated with the class of 1953 from Marissa Senior High School.

She married Kenneth Scanlan on September 4, 1955 and together their marriage was blessed with 40 years and the joys of raising their children before his death on January 31, 1996.

After Verona and Kenneth married, they resided in Brighton for a short time before settling in Delhi, where Verona has remained for the past 60 years.

Verona held various office jobs throughout her life, including many years working in the parts department at Hoefert Dodge in Alton. She later went on to work as a cook at Fran and Marilyn’s restaurant in Jerseyville, where she was known by many as “Ma” and developed many friendships throughout the years, as well as praise for her “one-of-a-kind” fried chicken recipe. In addition, she worked alongside her husband, owning and operating the Midway Tavern in Delhi for several years.

Verona was a devoted wife, a loving mother and a proud grandmother and great-grandmother and enjoyed each and every moment she was able to spend with her family. In her spare time, she enjoyed tending to her lawn and flower garden as well as watching and feeding the hummingbirds.

Surviving are her two sons and daughters in-law, Steve and Donna Scanlan of Orland Hills and Jeff and Jennifer Scanlan of Florissant, MO; two daughters and sons in-law, Peggy and Lionel Zimmerman of Delhi and Becki and Orville Reynolds of Jerseyville; eight grandchildren; fourteen great-grandchildren; a sister and brother in-law, Geri and Russell Stolze of East Moline; as well as two brothers and sisters in-law, Dale and Carol Brockmann of Okawville and Rodney and Linda Brockmann of Albers.

In addition to her parents and her husband, she was preceded in death by a son, Michael Scanlan and a sister, Fern Jasper.

Visitation will be from 10 a.m. until time of funeral services at 12 noon on Tuesday, May 14, 2019 at the Crawford Funeral Home in Jerseyville.

She will be laid to rest alongside her husband and her son at the Upper Alton Cemetery.

In lieu of flowers or plants, memorials may be given to Riverbend Humane Society, in care of the funeral home.