Republican members of the Downstate GOP elected State Representative Charlie Meier to serve as their Vice-Chairman. The Downstate GOP consists of a majority of republican representatives serving in the Illinois General Assembly. Rep. Meier’s mission, “elect more downstate republicans to the State House and work towards ga 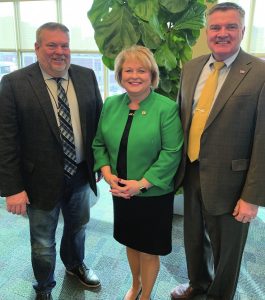 ining the majority in the House of Representatives.”

“I’m honored to serve as Vice-Chairman of the Downstate GOP,” said Rep. Meier. “I will continue to help recruit and raise funds to support candidates so we can take control of the State House away from Chicago democrats. I’m tired of Chicago politicians running our state into the ground. We can do better, but it starts with electing more republicans in the legislature. Chicago has ruled long enough, the only way we can make swift changes is to pick up more seats and gain the majority.”

The Downstate GOP is an official fundraising committee formed in 2013 with the purpose “to protect the values and interests of downstate families by advancing the political cause of candidates.”

Rep. Meier added, “Chicago politicians are bankrupting our state, they want to dig deeper into our pocketbooks by adding taxes on income, plastic bags, and streaming services – to top it off they want to further diminish our Second Amendment rights. The best way to put a stop to their agenda is to elect more downstate republicans to the State House.”