Lorene, nee Bouas, Sinn, 92, of Darmstadt, IL; born on January 6, 1927 in Coulterville, IL; passed away on April 14, 2019 at her home. Mrs. Sinn and her husband Leonard owned and operated Sinn’s Inn in Darmstadt for over 20 years. She attended Holy Ghost United Church of Christ. Lorene enjoyed embroidery, making quilts and word find books. And she loved listening to her 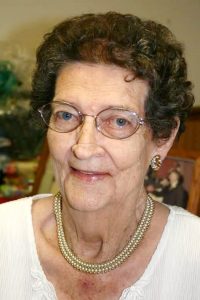 In lieu of flowers memorials may be made to Darmstadt Memorial Cemetery or Holy Ghost Women’s Guild.

Condolences to the family may be expressed online at www.heilschuessler.com

Funeral: Services will be held at Holy Ghost United Church of Christ in Darmstadt, IL on Friday, April 19, 2019 at 11:00 a.m. with Rev. Nancy Shubert officiating.

Interment: Burial will be held at Darmstadt Memorial Cemetery in Darmstadt, IL.

Heil-Schuessler Funeral Home in New Athens, IL is in charge of arrangements.