Lois Faye Schorfheide, 68 of Nashville, passed away at 10:37 a.m. on Wednesday, February 27, 2019 at Barnes Jewish Hospital in St. Louis. She was born on August 13, 1950 in Hoyleton, the daughter of Arthur and Irene Unverfehrt Reitemeier. She married Ron L. Schorfheide on September 6, 1969 in Hoyleton and he survives. Also surviving are two sons, Nathan (Sheri) Schor 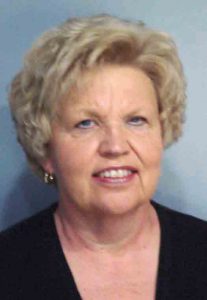 fheide of Chatham and Matthew (Michelle) Schorfheide of Rochester; a daughter, Kristen (William) Chaplain of O’Fallon; two sisters, Bernice Wessel of Carlyle and Marilyn Reitemeier of Nashville; six grandchildren, Janna, Cameron, Jocelyn, Hannah and Rachael Schorfheide and Greyson Chaplain; several nieces, nephews and cousins. She was preceded in death by her parents, an infant sister Ruth and a brother-in-law; Howard Wessel.

Lois was a 1968 graduate of Nashville High School. She was the owner of the Montgomery Ward Catalog store in Nashville until it closed. She then worked at the Farmers & Merchants National Bank in Nashville and the Army Corp of Engineers at Carlyle Lake. In 1994, Lois received her Bachelors Degree in Education from McKendree University. She then went on to teach at Hoyleton Grade School and in the Centralia Grade School system.

She served as an organist at area churches for 50 years. Lois was a member of the Trinity Lutheran Church in Nashville where she served as organist and accompanied the Trinity St. John School praise choir as well as served as church choir and hand bell director. She was active in the Lutheran Women’s Missionary League and Fellowship Club. She enjoyed playing cards, doing puzzles and traveling with her husband Ron.

Funeral services will be held at 11:00 a.m. on Saturday, March 2, 2019 at the Trinity Lutheran Church in Nashville with Rev. Aaron Kotila officiating. Burial will follow in the church cemetery. Friends may call from 5:00 to 8:00 p.m. on Friday and 9:00 to 10:45 a.m. on Saturday at the church. Memorial contributions may be made to Trinity Lutheran Church Music Fund or a charity of the donor’s choice. Styninger Funeral Home in Nashville is in charge of arrangements. Online expressions of sympathy may be made at www.styningerfuneralhomes.com or on the funeral home’s Facebook page.