Mrs. Evelyn Esther (Decker) Piotrowski of Ashley, IL departed this life at her residence on Sunday, February 24, 2019 at 4:30 P 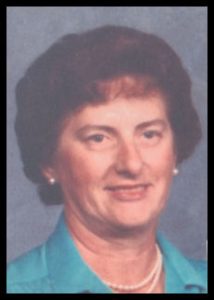 Evelyn was born on July 13, 1929 in Pilot Knob Township, Washington County, IL, the daughter of Walter and Ann (Kult) Decker.  She was united in marriage to Thomas R. Piotrowski, Sr. at St. Michael Catholic Church in Radom, IL on September 5, 1949 and he preceded her in death on February 22, 2006.

Evelyn was a graduate of Nashville Community High School.  Before marriage, she was employed in St. Louis with the Army Corps of Engineers and DoD.  After marriage she became a homemaker.  Evelyn was of the Catholic faith and had many interests.  She enjoyed traveling, quilting and political clubs.

Evelyn was preceded in death by her parents, husband, a son, Thomas Jr. in 2016; four siblings, Irwin, Darla Dean, Floyd and Elmer.

Mass of Christian Burial will be held at the St. Michael Catholic Church in Radom, IL on Tuesday, March 5, 2019 at 10 AM with Fr. Oliver Nwachukwu officiating.  Interment will follow in the church cemetery.

Friends may call at the Campagna Funeral Home in Nashville, IL on Monday from 5 PM until 8 PM and on Tuesday from 7:30 AM until 9 AM.

Should friends desire, mass offerings or memorials may be made to the St. Michael Cemetery and will be accepted by the Campagna Funeral Home.