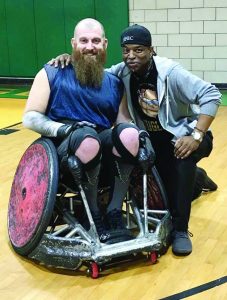 Melton and LaVar Burton on the set of NCIS: New Orleans that features wheelchair rugby action.

Many people might consider a spine injury to be a catastrophe. Chuck Melton of Hoyleton turned it into an opportunity.

Despite being confined to a wheelchair, Melton turned himself into a world class wheelchair rugby player who has participated in international competitions against the best in the world. And playing on Team USA provided him another opportunity: a guest spot on a network television show.

Melton recently returned from Louisiana, where he was part of an episode of NCIS: New Orleans which featured a character playing wheelchair rugby.

“Its amazing the amount of opportunities this has given me,” Melton said of his injury. “It really has been a blessing for me.”

Read the full story in this week’s issue about how Melton and his teammates ended up on television.