Gustave C. “Gus” Unverfehrt, 90 of Hoyleton, passed away at 2:50 p.m. on Wednesday, February 20, 2019 at Cedarhurst Care Center in Centralia. He was born on April 10, 1928 in Washington County, the son of Gustave F. and Clara Twenhafel Unverfehrt, Sr. He married Irene Caroline Elisa Michael on April 24, 1949 at Bethlehem Lutheran Church in Ferrin and she passed away on October 17, 2012. Also preceding him in death were his parents; a daughter, Diane Kay (Unverfehrt) Speare; brothers- and sister-in-law, Elmer (Irma), William, Harold, Alvin (Laverne and Hilke) Unverfehrt; sister- and brother-in- 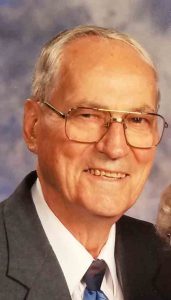 Gus founded Gus C. Unverfehrt Farm Supply Inc. 1961.  He started by supplying farm feed and livestock equipment to the local farmers.  This small enterprise developed into supplying equipment for the livestock, dairy and grain industries in the area.  In the early years Gus and his wife, Irene ran this business all on their own.  Over the years to follow it had grown to employ 50-plus employees, including his two sons Larry and Kevin Unverfehrt. Upon his semi-retirement Gus continued to haul equipment for the business from factories across the country to the home base and onto the job sites.  Gus enjoyed meeting and spending time with each and every farmer.  He had the gift of gab and it truly turned him into an amazing and great salesman and business owner. He attended Hoyleton Grade School and Hoyleton High School.  He belonged to the Trinity Lutheran Church in Hoyleton where he held numerous church office positions and was also a member of the Trinity Men’s Club and Hoyleton Lions Club.

Gus and Irene took many trips together including Spain, Hawaii and the Bahamas of which they earned through their business. Gus recently celebrated his 90th birthday in April of 2018 with an Open House where family and friends attended.

Funeral services will be held at 11:00 a.m. on Wednesday, February 27, 2019 at Trinity Lutheran Church in Hoyleton with Rev. Nathan Wollenberg officiating. Burial will follow in the church cemetery. Friends may call from 4:00 to 7:00 p.m. on Tuesday at the church. Memorial contributions may be made to Trinity Lutheran Church or Trinity Building Fund. Styninger Funeral & Cremation Chapel in Hoyleton is in charge of arrangements. Online expressions of sympathy may be made at www.styningerfuneralhomes.com or on the funeral home Facebook page.