Mr. Howard P. Johannes of Ashley, IL, departed this life at Washington County Hospital in Nashville, IL on Sunday, February 17, 2019 at 7:54 PM. He had attained the age of 94 years, 5 months and a day. 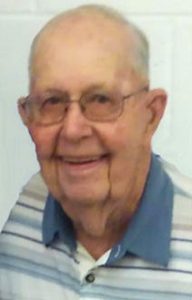 Mr. Johannes was born on September 16, 1924 in Washington County, IL the son of August Peter and Bertha Louise (Mill) Johannes. He was united in marriage to Delta McConnell on September 2, 1950 at St. Mark’s United Church of Christ in DuBois, IL and she preceded him in death on January 22, 2016.

Howard was a member of the United States Army serving during World War II. He was a lifelong farmer and a member of the St. Mark’s United Church in Christ in DuBois, IL, the American Legion Post 110 and the Ashley Sportsman Club. Howard enjoyed getting together with others and playing pinochle.

He was preceded in death by his parents, wife and his brother, Osgood Johannes.

Funeral services will be held at St. Mark’s United Church of Christ in DuBois, IL on Thursday, February 21, 2019 at 11 AM with Rev. Tom Ellison officiating. Interment will follow in the St. Paul Cemetery in Nashville, IL.

Military graveside rites will be accorded by the American Legion Post 110.

Friends may call at the Campagna Funeral Home in Ashley, IL on Wednesday from 5 PM until 8 PM and on Thursday at the church from 9:30 AM until the service hour.

Should friends desire, memorials may be made to the St. Mark’s United Church of Christ and will be accepted by the Campagna Funeral Home.