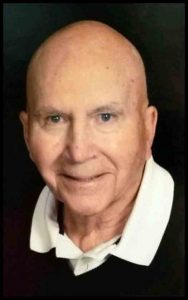 Paul was born in Cordes, IL on May 25, 1926.  His parents were Albert C. Oexeman of New Minden and Emma Agusta Harre of Hahlen, IL.  Paul’s father was a blacksmith in Cordes for many years.  Paul went to school at Halen Parochial School for 7 years taught, by AC Marquardt, and took the eighth grade at Kerr Public School, taught by Lye Soeteber.  He was united in marriage to Myrtle Kay Spencer on March 19, 1961 at St. Peter’s Hahlen Church and she survives his passing.

In 1944, he was drafted into the US Army and was in basic training at Camp Robinson, Arkansas.  He then was sent overseas to the Philippines near Leyte and Milne Bay.  At the end of the war he served the rest of his time in Pusan and Seoul Korea, attaining the rank of Tech Sargent in the 340 Combat Engineer. Back in civilian life, Paul worked for his brother in the car business, some 30 years in construction for Dean and Gene Haege, Rich Finke and then was self-employed for a number of years

Paul loved hunting and fishing.  He fished in many states, also in Ontario and Quebec, Canada.  He and Myrtle Kay served some 30 years in Trinity Lutheran Church on different jobs.  He was a member of the V.F.W. organization in Nashville and then as Nashville V.F.W closed he became a member of the Okawville V.F.W.

He was preceded in death by his parents, three brothers, Stanley, Albert and Marten Oexeman and two sisters, Regina Obermeier and Viola Frederking.

Per the wishes of Paul and his family, cremation will be performed and a memorial service will be held at the Trinity Lutheran Church in Nashville, IL on Friday, February 8, 2019 at 11 AM with Rev. Aaron Kotila and Rev. James Miller officiating.  Interment of Ashes will follow in the church cemetery.

Friends may call at the Trinity Lutheran Church in Nashville on Friday from 9:30 AM until the service hour.

Should friends desire, memorials may be made to the Trinity Lutheran Church and will be accepted by the Campagna Funeral Home, who is assisting the family with arrangements.