Wilmer was an Air Force veteran of the Korean conflict. He worked at Scott AFB as a supply clerk from 1961-1991. In 1974, he began driving a bus part-time for O’Fallon Township High School and this quickly became his passion. He became a full-time driver after retiri 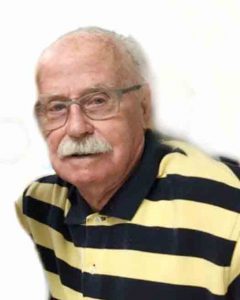 ng from Scott AFB, and for 33 years, Wilmer faithfully drove teams, clubs, and classes across the state in his yellow school bus which endearingly became referred to as “Wilmer’s Taxi.” He often said he had too many grandchildren to count, as the students referred to him as “Grandpa.”

Wilmer was a longtime follower and supporter of bluegrass music, specifically George Portz & the Friends of Bluegrass and the Howlin Brothers band. He “bled blue and gold,” as he loved his O’Fallon roots and supported OTHS athletics and band. He began every Monday morning at Wood Bakery, then spent the day at the local firehouse playing cards with his buddies.

In lieu of flowers or other gifts, memorial donations are suggested to either O’Fallon Band Boosters, or O’Fallon Fire Department. Online condolences may be posted at www.wfh-ofallon.com