Mr. Stanley Edwin Going of Okawville, IL departed this life in the emergency room of the Washington County Hospital in Nashville on Sunday, December 30, 2018 at 12:25 P.M. after a sudden illness. He had attained the age of 86 years, 10 months and 8 days. 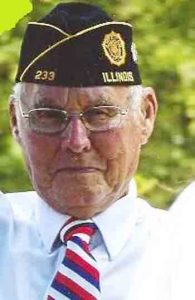 Stanley was born on the family farm in Covington, IL on February 22, 1932 the son of Edwin and Frieda (nee Lange) Going. He served in the United States Navy during the Korean War from 1951 until 1955, stationed aboard the U.S. Navy destroyer, the USS Wren. Stanley was united in marriage to Irene Rajkowski in Queens, NY on June 2, 1955 and she survives his passing.

Mr. Going was a farmer and rural mail carrier until his retirement. He was a faithful member of the Immanuel Lutheran Church in Okawville. He was also an active member of American Legion Post #233 and VFW Post #5596 both in Okawville. Stanley was an avid outdoorsman and enjoyed fishing and gardening.

Left to mourn his passing is his wife of 63 years, Irene Going of Okawville; two children, Deb Klein and husband Bill of Seymour, IL and Jeff Going and wife Jackie of Okawville; five grandchildren, Paul Klein and wife Jackie, Joe Klein and wife Kasey, Kate Klein McCrae and husband Brett, Brian Going and Julie Going; one step granddaughter, Diane Abbott; six great grandchildren; two sisters, Shelby Vance of Sonoma, CA and Vernette Homann and husband Jerry of Highland, IL; several niec
es and nephews as well as a host of friends.
In addition to his parents, he was preceded in death by a brother, Ardell Going and a sister, Shirley Meyer.

In accordance with the wishes of Stanley and his family, cremation was performed.

Memorial services will be held from the Immanuel Lutheran Church in Okawville on Monday, January 7, 2019 at 10 A.M. with Pastor Eric Wood officiating. Interment of ashes will be in the Olive Branch Lutheran Cemetery in rural Okawville. Military graveside rites will be accorded by American Legion Post #233 of Okawville.

Friends may call at the Campagna Funeral Home on Sunday from 4 P.M. until 7 P.M. and at the church on Monday from 8 A.M. until the service hour.

The family has requested that in lieu of flowers, memorials may be made to the Immanuel Lutheran School, the Disabled American Veterans, or the charity of the donor’s choice and will be accepted by the Campagna Funeral Home.