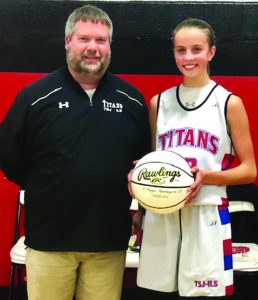 Joe Kirby presented Megan Rennegarbe with a basketball for her 1,000 points she achieved as a Lady Titan.

ILS/TSJ beat St.Mary-Mt. Vernon 61-41. Rennegarbe had a big game, pouring in 33 points to lead all scorers. Raelyn Obermeier had 14 points, Kris May, Mallory Bening and Lauren Rapp had four each, and Ireland Rushing chipped in two.

The Lady Titans followed that up with a 29-22 win over Nashville Middle School. Rennegarbe finished with 22 points, including her 1,000th point as a member of the ILS/TSJ squad. Obermeier went for three, Rapp had two and Bening and May had one points each.

Next on schedule after Christmas break is 8th grade night against St. John’s Chester and Willow Grove.