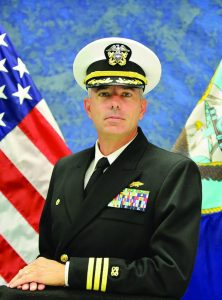 The old saying is that one of the military’s job is to break things, but Glenn Eberhart of Nashville does the opposite.
Eberhart, who was recently promoted to command Naval Mobile Construction Battalion 18, known better as Navy Seabees, does more building than destroying.
A civil engineer working for Ameren in civilian life, Commander Eberhart, an officer in the Naval Reserve, says the new posting is as good as it gets for an officer.
“This is a dream job for a Navy Civil Engineer Corps Officer,” he said.
According to a release from the Navy, Seabees are the Navy’s premier Construction and Engineering asset with the ability to build to all specified standards within any environment.
“Seabees are a defensive force, but we are trained with an offensive capability to take something for us to defend,” Eberhart said.

Read more about Eberhart’s career and new appointment, in this week’s issue.