Green energy is coming to Okawville, and it will not be too long before the village starts seeing the savings.

At the October meeting, village board members approved a proposal from EFS Energy to install solar panels at the village water treatment lagoon early next year.

“When we started looking at the numbers, the question went from ‘should we do it?’ to who should we do it with,’” said Drew Hesker, chairman of the village board finance committee.

The proposals called for the installation of a solar array around the lagoon at a cost of $300,000. That sounds like a lot of money, but the returns will more than pay for the up-front costs.

“There are a lot of towns doing projects like this, and there are a lot of incentives and credits that are available,” Hesker said. “Even if power rates don’t go up as much as they have in past years, the village is still going to come out ahead.”

The lagoon is the largest power pull in the village, according to Hesker, costing about $1,800 a month. Once the solar array is up and running, the village will begin seeing an immediate savings on that.

Additionally, Ameren offers a series of grants and credits to help transition the power company to a higher percentage of electricity generated by renewable sources, like solar.

“Without getting too far into the weeds, a conservative estimate says the credits and savings will have the initial costs paid for within about eight years,” said Hesker.

As more and more groups are taking advantage of the incentives, the village board wanted to get the approvals in place to start the process by the end of the year, when the incentive packages could change.

“We decided to do this now while we knew the money was still there,” said Hesker. “As more groups start going solar and Ameren gets closer to its green energy goals, the credits could dry up.”

The solar panels from EFS Solar are warranteed for 25 years and are rated to withstand weather conditions including softball-sized hail stones. Weeke Sales and Service will do the electrical work on the project.

EFS will break ground on the project in January or February of next year. The village board is also looking to see if other solar projects in town would make financial sense. 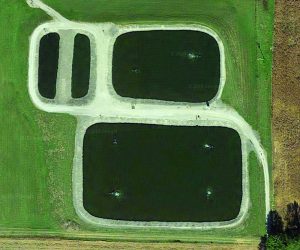 Solar panels will be installed at the lagoon just north of the ball diamonds at OCYA Park.

With an up-front investment in solar power in the works, soon the village will be saving some green while taking advantage of renewable energy.